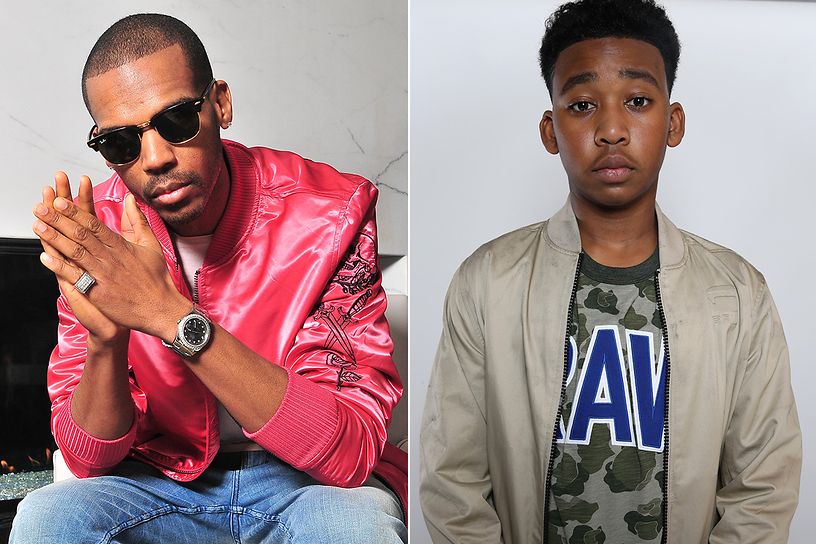 gave rise to some of the biggest names in hip-hop: DMX, Eve, Jadakiss and Swizz Beatz just to name a few. Now their new record label—Ruff Ryders Indy—is ready to create another generation with Quadir, Lil Waah, Drew James and the legendary DMX.

Fuse sat down with new signees Drew James and Lil Waah to discuss their latest singles “Paper Chaser” and “Dab N Dip,” respectively,” as well as the current hip-hop scene and how they plan to leave their mark on the industry. And of course, we dove into what fans can expect from the anticipated Ruff Ryders 20th anniversary reunion show on Friday (April 21). Read on for our interview with rap music’s freshest faces.

FUSE: What made you decide to enter the music industry?

Lil Waah: I entered a contest at school when I was four years old, and I told my parents I wanted to rap. I came in first place and then I just wanted to keep going. I walked around the studio all the time and saw DMX, Swizz Beatz, The Lox and thought “Yo, this is fire!”

Drew James: I was always a fan of hip-hop. I came up on DMX, Ja Rule and 50 Cent. I never took it seriously until my final year of high school. At that time, 8 Mile was out and battle rapping was a really popular thing to do. Jin was up in Toronto doing a freestyle battle at a club and I entered just jokingly. I ended up winning and I started doing more of them. That’s when I realized maybe this is my true calling.

Do you find people have expectations for you because you’re signed to Ruff Ryders?
Drew James: There’s gonna be pressure any time a new artist becomes a part of a legendary imprint such as Ruff Ryders. But it’s all about how you deal with it. Someone might say, “Oh, you have big shoes to fill.” But I don’t look at it like that. I’m here to create my own path.

The label is celebrating 20 years and it’s amazing the legacy they’ve made over the years.
Drew James: I remember the first time I heard DMX’s “Get At Me Dog.” I was in the backseat of my step-mom’s car and we just left the supermarket. We just got our version of Hot 97, which was Flow 93.5. I was freaking out! From there, I knew X was going to be big. I think Ruff Ryders did something that was extremely important. They completely shifted hip-hop music during that point in time. Everything was shiny suits and bling. That was dope, but then Ruff Ryders came and took it back to the streets. I think we’re about to start another legacy because now we have new artists.

There are so many young rappers out right now, like Lil Uzi, Lil Yatchy and 21 Savage. How do you plan to stand out among the rest?

Lil Waah: My music is never going to die out, just like X and The Lox. Their music will never go out of style. I want my music to stand out like that.
Drew James: I gotta play chess, not checkers. I know the quality of music I can make and that I’m a versatile artist. So in business it’s people, product, process. You gotta make sure you’re hitting those three p’s to hit your career goal.

Have any of the Ruff Ryders artists taught you about the business?
Drew James: Busta [Rhymes] actually gave me some advice at the BET Awards and told me to just stay working. Waah told me the same thing, and they come from the same generation that achieved greatness.

Lil Waah: I was in the studio with X and he wanted me to write something. He locked me in the studio and I only had four hours to do it [laughs]. He listened to it and was like, “You really think I can be on the hook for this song.” I said no, and he told me I have to be consistent. There was another time at the BET cypher where X was spitting his bars really slow. When you rap fast, they don’t catch the lines. So he told me to make sure I rap slow enough so people can hear me.

What are some setbacks you’ve had throughout this journey?

Lil Waah: I was performing at a show in Yonkers when I was like 6 and this kid in the audience just yelled “You suck!” I was mad of course but I realized as I got older people aren’t always gonna like you.

Drew James: My only setback is myself. I used to have a crazy temper and let everything get to me. You know how 50 Cent is petty? If we had a petty contest, I think I would crush him! But that was my setback where situations would consume me so much that I would miss opportunities.

I’m sure you have thoughts on the current rap industry. It seems like most people, mainly older fans, are fed up with the mumble rappers.
Lil Waah: Nowadays kids want to hear something different. They don’t want to hear someone like X talking crazy. The mumble rappers though, I rock with them because they’re getting exposure right now. I don’t think the older ones are going to come back unless they change their ways.

Drew James: I can’t knock it, because when I was bumping music my mom would look at me like “What is this crap?” And I know how I felt when somebody did that to me, so who am I to do that to them? They’re providing for their families and a lot of them are employing their friends. They’re creating a whole new culture. When hip-hop was just rap, rappers were activists and talked about what’s going on in their community. Then it transitioned to “everyone in our community is affected by narcotics,” then “we’re selling the narcotics and hustling.” Now we’re using them! My generation was the pushers, so it’s weird when I see them saying “I’m on a Xanny, I’m on a Molly.”

Tell me the biggest lesson you’ve learned thus far.
Drew James: Let people see your work ethic. I’ve been trying to make music for 13 years. Waah [Joaquin Dean] was introduced to me in 2008 and we didn’t ink a deal until now. I took the opportunities given to me and capitalized on them. I drove down through snowstorms, I ran up on Waah in the studio and was like, “Yo I got a mixtape!” So if you don’t have all the money, don’t worry about it. Invest your time and networking with the right people.

So I’m going to switch it over to you, Drew. How did “Paper Chaser” come about?
Drew James: The whole track is authentic and you get a real insight to my life. Before the record deal, I’ve been flying private and driving crazy $100,000 cars. It’s not to boast anything because I’m a very humble person. But in regards to that record, I’ve realized I was doing stuff that I shouldn’t have been doing. I’m dealing with situations right now because of the decisions I made prior. But when I heard the beat, it just brought that out of me.

It sound very New York, but you’re originally from Toronto. At first I thought you were from Harlem! Has our native sound affected your music?
Drew James: Growing up, I never consumed a lot of Canadian records. I was listening to Jay Z, Fabolous, 50 Cent, DMX…mostly hip-hop from New York. Those were my influences. Toronto’s music and culture didn’t really have an affect on me. But when you think about it, Toronto isn’t that far from New York. We’re so close to you guys and we’re similar in a lot of ways that most people don’t realize. All the media that we get is all American.

Toronto currently has the music game on lock, and honestly I’m a bit tired of it!
Drew James: It’s a 6 side ting! I definitely see what you’re saying and know it’s not a hate thing at all. We’re starting to get close to where New York was. I feel like every city has its own time to shine. The West Coast had it for a minute, then Atlanta, Miami and New York had it FOREVER. Drake did something that the other artists before him never did. He made such an international impact where all heads turned like, “Yo, Toronto?!” Now you have The Weeknd, PartyNextDoor, Tory Lanez, Alessia Cara, Justin Bieber. These are powerhouses and the city is like a goldmine. We’ve been had gold but we just didn’t have the opportunities. We couldn’t go down the street to the Def Jam, MTV or Fuse offices.

As for you Lil Waah, you’re only 14 years old. Do you find it hard for people to take you seriously because your dad is the Ruff Ryders CEO?
Lil Waah: Everyone is gonna say that. From your perspective, you’ve seen me on BET and XXL. But you never really knew what I had to do to get there. I gotta show yall that my father is not going to just stick with me. There’s other people around.

Okay, let’s bring it back to the reunion show. I can’t even contain my excitement; we’ve haven’t seen these guys together on stage in so long.
Lil Waah: It’s an honor to be on stage with some of the greatest people who made history. They have a lot of fans and we’re coming out as the young boys. They’re pitbulls and we’re little pups…for right now! Everybody needs to show up. They’d be bugging if they don’t.

Drew James: You should expect an amazing, amazing experience. Look at what the Bad Boy reunion tour became. I went to that show and I remember where I heard all those records for the first time. I felt like I was walking home from school again sharing airbuds with my homies after basketball practice with the discman. And all of these guys are still relevant! I think this show is gonna take people back to a lot of moments in their lives. It’s going to be nothing short of epic. Make sure you delete all your pictures and clear your phone so you can be ready!